6’7” W Jayson Woodrich (Scotland Campus)
I watched both of Scotland’s wins last weekend; in one, Woodrich shot really well, in the other, he couldn’t get many open looks. However, his rebounding contributions and overall effort was the same in each game, which I really liked. Woodrich is 6’7” and has a nice, quick outside jumper that he shoots with deep range. He is also capable of going off the dribble for a few bounces to make something happen. To go with his height, he has a build to him that he uses fairly well. Woodrich isn’t the most athletic but fights for boards and hustles for long rebounds that others wouldn’t. He currently has 4 offers in hand and considering his play and feedback from coaches during the weekend, more could be on the way soon.

6’5” SG Kyle Murphy (Bosco Institute)
I was first impressed with Murphy when I watched him in July of 2017 with BABC, but I hadn’t been able to see him in over a year. The Massachusetts native is now doing a post-grad year at Bosco Institute in Illinois and had a nice showing while back in MA for the weekend. His body has gotten considerably bigger and still has the qualities that originally made me a fan of his. Murphy averaged 18 PPG in 2 games I saw on 8-20 shooting from 3 to go along with 6 RPG. He was pretty streaky with his outside shooting, but the streaks he went on were very helpful and once he saw one go in, he was hard to slow down. Murphy does not mind physical play inside and also has good IQ and passing ability. He could be an asset to a variety of programs. 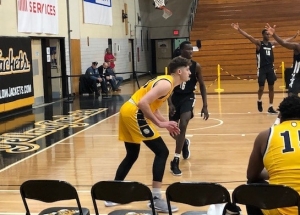 5’11” PG Terrell Strickland (Scotland Campus)
You’d be hard-pressed to find another guard in the event that played with more energy than Strickland. He comes off the bench for Scotland Campus, but immediately makes an impact once he’s on the floor. Strickland has a really strong body and uses it often but with control, which helps to negate some of the height disadvantage he has with some opponents. In the 2nd half of Scotland’s Saturday game, Strickland went into full on attack mode and his efforts led to them getting a blowout win. His speed with the ball creates a ton of opportunities and he balances his own points with assists quite well. You could tell that once Strickland gets going, his team follows his example and picks up their level of energy as well. He gives great effort on both ends and showed that he can fill different roles effectively during the weekend.

5’8” PG Darius Ervin (Northfield Mount Hermon)
Ervin was one of the more confident shooters I saw at the event and that confidence was well-warranted. It did not take Ervin long to find a rhythm against Mt. Zion as he hit shots early and often on his way to being the game’s leading scorer with 22 points (8-12 FG, 5-6 3FG). Ervin lacks size but still finds ways to get open shots pretty often. He operates off ball screens well and once there’s some space, he’ll get his jumper off with a quick release and some elevation. NMH always churns out guys who are smart and understand the game; pairing that with Ervin’s ability to fill it up should place him in a good spot at the next level soon.

6’4” G Brian Stevens (Springfield Commonwealth)
Springfield had a multitude of perimeter pieces that produced at a high rate in their game I saw against Massanutten, but I was most impressed with the efficiency in which Stevens’ points came. He only took 7 shots, but finished with 18 points (3-5 3FG, 7-9 FT) in addition to 8 rebounds. Stevens’ best quality is his shooting prowess as he is a sniper from deep who is efficient and selective with his attempts. He has great form and doesn’t take bad ones. Stevens is not restricted to just taking outside shots either, he is a capable ball-handler, takes contact, and stays involved on the defensive side of the ball also. Assumption recently offered him and the consistent numbers he’s putting up will force others to get involved.

6’1” PG Nick Boyd (Bosco Institute)
The primary ball-handler for a balanced, well-rounded Bosco group, Boyd put together a nice weekend in Massachusetts. In their two wins, he averaged 13.5 PPG, 6 RPG, and 3.5 APG. Boyd is a fast lefty who can get to the basket at will once the ball is in his left hand and he decides to change gears. On Saturday against NBA Academy, he was really good in the 2nd half attacking for finishes and then finding others once the defense adjusted. Boyd’s ability to get in the paint and create for himself and his teammates was impressive in both games. He stays aggressive and has both the physical abilities and feel for the game to be effective even in traffic. 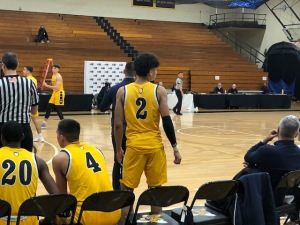 6’5” G Connor Murphy (Golden State Prep)
Basketball purists would have appreciated the way Murphy played as GSP took on Bosco to start Sunday’s action. It was a rough game for most of his team, but he gave solid contributions from start to finish in numerous areas. Murphy has a nice outside shot but is also really good with the ball in his hands. He is controlled and patient when he creates, reading the defense well and waiting for things to open up before looking to attack and make a play. He’s close to 6’5”, sees the floor well, and scores a few different ways off the bounce. I also liked what he showed on defense; Murphy anticipates things on that side well and frequently racks up steals. He’s a positive vocal leader as well which is always nice to see. His collection of tools should attract coaches through the winter and into the spring.

6’5” W Javon Cooley (Bosco Institute)
I don’t think there was a guy that impacted the game the way Cooley did over the weekend. Now while he did put up stats in Bosco’s 2 games that I watched (13 PPG, 6 3PM), his impact went way beyond the box score in my opinion. At 6’5” with good strength and toughness, Cooley did not mind getting dirty in the paint and battling with bigger guys defensively. It was not a rare occurrence to see him boxing out taller forwards for rebounds, even if he wasn’t the one secuuring it. Cooley has active hands and frequently gets deflections and swipes the ball from opponents. He also possesses a clean, consistently lefty shot and will attack the lane through contact. The motor and grit he played with was refreshing to watch. 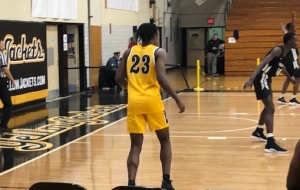