Angelo Brizzi just finished up a strong junior season at Highland and is preparing to join newly formed Team Curry for their first year as part of the UAA. Brizzi is already a heavily recruited prospect with around 20 MM offers, but is hungry to keep getting better and is looking forward to helping the Team Curry program in its inaugural season. A creative lefty PG, Brizzi has size and tons of skill that have made him a popular recruit. He’s a good teammate, does the little things, and approaches the game the right way. While he is focused on having a good summer, he also has a state championship in mind next year at Highland. Look for Brizzi to enter next high school season with numerous offers from HM programs. Below we discuss his outlook on things at the travel season approaches. 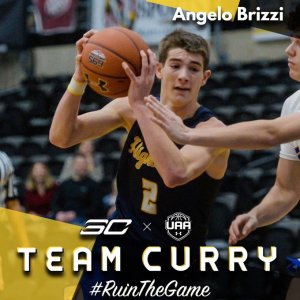 You played with BBC previously on the Adidas Circuit, but this year you’ll be with Team Curry in the UAA- Talk about what went into that decision and why you think Team Curry was the best fit for you. How do you think you’ll benefit from playing with them?

“I talked with a lot of the programs in the DMV area, but Team Curry seemed like the best situation because it was a brand new program. With some of the programs in the DMV, there’s politics involved as to who plays, who makes the teams, etc. Since Team Curry was new, I knew there wouldn’t be any of that. After talking to Coach Sim, I knew that the main priority was going to be winning games and making a mark during the first year on the circuit, and he told me that I’d be a big part in helping the team do that.”

Currently, you have a ton of MM offers with some solid HM interest. What do you think the next step is for you to show HM coaches that the interest should turn into offers?

“I think that I just need to keep playing in front of those HM coaches so they get a chance to more, but I’m not too concerned about whether HM’s will offer or not because some of the MM’s I have right now are great programs.”

From what I’ve seen, you’re a pretty unique player. What do you think makes you unique and what about your game sets you apart from other guards that have good size and skill?

“The main aspect of my game that I think sets me apart from other guards is my ability to shoot, specifically my range, quick release, and being able to shoot great off both the dribble and the catch. Also, I think I do a lot of the dirty work that other guards don’t like to do too much: I take charges, I dive on the floor for lose balls, I rebound, etc.”

Looking ahead a bit, is there anything specific that you’re looking forward to between now and the end of your senior year? Do you have any goals you want to achieve before you enter the college ranks?

“The only goal I have for my senior year is winning a state championship. That’s been my main priority since freshman year, and this year we got extremely close to winning one but fell short, so next year all I’m worried about is a ring.”