Great events have taken place in Atlanta on consecutive weekends- The Tip-Off Classic and the LakePoint Live Showcase. Both featured a wealth of prospects who are starting to make themselves after not being able to show their talents in the spring. Here are a few who impressed at either one of the events, or both of them.

Smart went for 20+ points in consecutive viewings I had of him, one at the Tip-Off Classic and one at the LakePoint Live Showcase. He caused matchup problems with his versatility and big body at 6’6” and also displayed a good motor. Smart has no issue handling in transition after securing rebounds and doesn’t get ahead of himself too often either. You will frequently find Smart banging bodies and crashing the offensive glass for 2nd chance opportunities. He doesn’t need the ball a ton in the halfcourt to be effective. His 2nd half showing against the TN Passion at the Tip-Off Classic was particularly good as he took it upon himself to make things happen after halftime. Smart should start to hear from a variety of college programs.

I caught Marshall in an early morning game on Saturday at the Tip-Off Classic and is strength and energy were no match for the opposition. At 6’3” with a linebacker-like build, Marshall was able to bulldoze defenders on his way to the basket. He is a respectable ball-handler who does a good job of staying low to the ground and is pretty fast with the ball in his hands. Once he grabbed a rebound, it was off to the races and straight to the rim. Multiple times, he was able to grab his own miss and overpower guys for 2nd chance points. His aggressive approach was there for the game’s entirety and propelled his team to a win. The physical side of the college won’t be difficult for Marshall to adapt to.

Every weekend, there seems to be a few guys who just know how to rack up points in bunches, and Moore was one of them at the Tip-Off Classic. He went for 25 points in impressive fashion when I watched him against Savannah Select at the Tip-Off Classic, showing a lot of skill and exciting play. Moore can hurt you from the perimeter with a nice-looking shot, but can also create his own offense. He utilizes crafty handles and quick change of pace off the bounce to penetrate the defense and get open looks. Although he has a slender frame, Moore has long arms and understands how to create contact for fouls once he’s among bodies inside. His well-rounded scoring package should attract college attention soon. 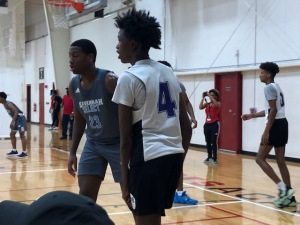 I was first impressed with Wolle at the GHSA Team Camp last June where he provided reliable shooting off the bench for Sequoyah. Fast forward about a year, and he’s still an outside marksman but has clearly put a lot of focus on developing the other parts of his game as well. Just like Deandre Smart, Wolle has put up 20 or more points in both games I’ve watched of his recently, and both were victories for his team. The way he performed at LakePoint against an Atlanta Allstars team with numerous D1 prospects had everyone talking. Wolle has become a shot-maker off the bounce, elevating over guys in the mid-range area and knocking down contested pull-ups. He is using his added strength to make smaller guards pay and seems to have a decent understanding of when to utilize each of his new tools. A significant bump in the next rankings update will be on the way for him if he keeps it up. 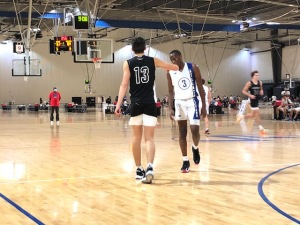 The next sleeper out of Northwest Georgia, Hadaway has quickly made sure that people know who he is early on by not only playing up in 17U, but also producing at a very high level. There aren’t many guys I’ve seen so far this summer who have played with the type of motor that he brings to the table. Hadaway is a threat for 10+ rebounds every time he steps on the court and never gives up on plays. He understands who he is, what his role is, and excels in it. When he steps out to the perimeter, Hadaway doesn’t overdo things with the ball and won’t make many turnovers. Currently, he is best getting into the paint and to the rim, where he can finish dunks with authority or take hits to convert. Hadaway also does a great job of running the floor in transition and will protect the rim actively. With coaches being able to freely contact 2022 prospects as of June 15th, Hadaway is worth looking into and getting involved with early for regional Division 1 programs.

NME has a host of prospects who are catching attention during these first few weeks of summer events, but their core of Kevin Taylor, Bobby Moore, Darwin Randolph, and Kristian Ford have stood out the most to me so far. The combination of these 4 can produce big scoring outputs and has resulted in some impressive wins. Taylor is bringing his trademark activity every game as expected, but he is also picking things up with his offensive production, particularly shooting from the outside. He is involved in the action nonstop and finds ways to be effective against bigger opponents on both ends. 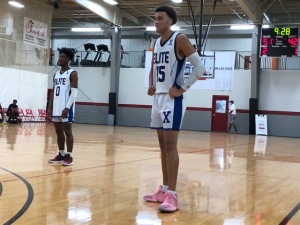 Moore is one of the more physically imposing wings around and after some injuries and having to take on a supporting role at McEachern this winter, he is fully healthy and out to make a statement. Moore goes into to traffic with bad intentions and is very hard to deter in the paint. While his best production comes with contact layups and above the rim finishes, Moore has improved as a perimeter shooter and is taking deep ones with confidence. 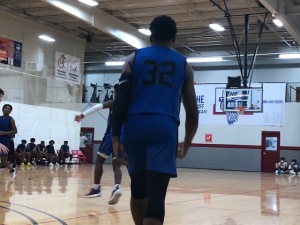 A Tennessee product, Randolph has given great contributions at the PG spot for NME. He is ultra-aggressive both offensively and defensively and plays with a motor that doesn’t seem to stop. Randolph uses a combination of strength, speed, and quickness to get in the paint with consistency and make things happen for his team. He uses these traits defensively as well by applying pressure on the ball, playing passing lanes, or sneaking up on guys. Randolph gives you a little bit of everything and sets the tone for the team with his attacking mentality.

Another asset on the wing, Ford gives NME a reliable shooter who is capable of attacking closeouts as well. He can go on shooting streaks in the blink of an eye to break games open and has range that is equipped for the college game. Ford has improved athletically and has showed that early on this summer, on both sides of the ball. He fits what coaches look for in SG/Wing prospects.