Our first Unsigned Senior Feature is on Caleb Golden of Shiloh. This series will highlight some top available 2020 prospects whose production have warranted more attention. The pieces in this series will include background information, stats/accolades, links to highlights, and then some analysis on a full game film of the prospect. Let’s see what Golden has to offer.

Similar to the way Jalen Benjamin and Damian Dunn did last year at Meadowcreek, Caleb Golden came to Georgia for his senior season and left his mark on the Peach State. His production this year honestly hasn’t been valued enough. I first saw him with Shiloh at Holiday Hoopsgiving where he put up impressive numbers and the Generals got 2 wins. Having averaged nearly 20 PPG in 7A while playing in top holiday tournaments and competing in a region that included Grayson, Archer, and Newton, it is surprising that he isn’t being talked about more. Shiloh suffered a narrow loss to eventual State Champion Wheeler in the Sweet 16; if they were the ones that came out victorious in that matchup and then made a run for the state title, I think that would have woken up others.

Golden is ultra-aggressive and his constant production was very helpful on a Shiloh team that went 24-4. He brings lots of energy to a team as well as a 3-level scoring package that he knows how to utilize depending on the situation. Golden also possesses some good physical traits and intangibles. What he did this year should speak for itself. 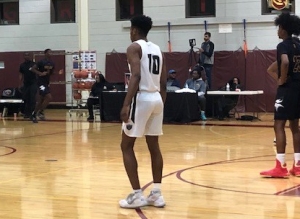 This matchup with Newton came shortly after Shiloh had to play East Coweta, McEachern, and Grayson in a week’s span. Even with that load, the Generals didn’t look tired and secured a 80-65 road victory with Golden scoring 24 points.

Golden scored 20 points in the 1st half alone on 7-9 shooting from the field and 2-3 from behind the 3-point line. He had a few turnovers to start the game where he got sped up, but settled in and had some really good moments around the basket. As he showed in previous games, Golden displayed his creative and unique finishing ability in the 1st half of this game. There was a stretch in the 2nd half where he got space and used his speed in the open court multiple times and then went up in traffic while adjusting to finish. His body control is exceptional. The 2 triples that Golden knocked down looked good coming off his hand after being at a triple-threat/stand-still position, and one was pretty deep.

In the 2nd half, his 4 points came off 2 dunks. He only took 5 total shots in the 2nd half as other Shiloh players got going and picked up their offensive production. This aspect did not have much of an impact on Golden though as he kept looking to be involved and impact the game in other ways.

I thought he showed good instincts and anticipation on defense, and he played with a really good motor. There were multiple occasions where he stuck his hands in to poke the ball away, hustled for a loose ball, or played passing lanes effectively. His athleticism and effort should allow him to be a good defender in college. Golden already has some strength too; I’ve spoken about his ability to take contact on the offensive end, but he went up & grabbed some traffic rebounds in this game and did not mind sacrificing his body or getting physical on defense either.

Overall, Golden is a confident, capable scorer who can get it done in a variety of ways. His ability to convert on difficult shots is one that not many in Georgia can rival. He may get ahead of himself at times, but I think the level of skill he shows should be convincing to college coaches. Honestly, some of those mistakes wouldn’t have even happened if not for the type of guys he had to face on a nightly basis. His combination of offensive firepower, athleticism, and energy are attractive and he will be a good late pickup for a school.