Continuing on from the 2021 out-of-state piece last week, here we look at 4 unsigned 2020 prospects and 2 impressive 2022 players who were viewed during the month of February. Similar to those in the 2021 article, these guys made significant contributions during big games and helped their teams in a variety of ways.

*Our individual showcase for 2020 prospects, the Senior Showdown, will be held next month on March 22nd. Players like the ones talked about below will be participating. Spots are filling up and college coaches are marking the date on their calendars. You can find more info at this link:
https://relentless-hoops.com/senior-showdown/

2020 6’0″ PG JJ Platt (Webb School)- 35 points, 10 rebounds, 5 assists, 3 steals vs. Howard at the Dr. Pepper Classic
There wasn’t a player I saw in February that came with a more aggressive downhill, attacking mentality than Platt did at the Dr. Pepper. He is well-suited for such a style due to his strong upper body, explosive legs, and physical nature. Platt was able to get in the paint nearly every possession as Webb took on Howard, and he converted on numerous shots in the paint that were heavily contested. He can hang & adjust in the air, play above the rim, and has no issue taking contact. Platt is an intense, competitive player who takes pride in defending and rebounding from the guard spot also. He plays at a really fast pace and although he is more of a scorer, Platt displayed some vision after penetrating the defense as well. If he got any type of day light in the open court, he was going to make something happen. Platt never seemed to get tired in this game and his nonstop effort led Webb to victory. He looked like a guy who could be an immediate impact player in college.

2020 6’6” SF Duane Posey (Memphis East)- 18 points, 12 rebounds, 2 made 3’s vs. Sunrise Christian at the Dr. Pepper Classic
The biggest win on the day at the Dr. Pepper Classic went to Memphis East as they took down national power Sunrise Christian. The Mustangs were led by a big double-double from Posey in the game; he brought his hard hat and gave them steady production. Posey has inside-out ability at 6’6” and maintains a nice balance of post and perimeter scoring. Sunrise had a clear size advantage, but what Posey gave up in height he made up for with toughness and determination. He has a cut, muscular frame that he uses with control and helps him on both ends. You could often find Posey challenging bigger Sunrise opponents for finishes at the basket and rebounds inside, which he succeeded at time and time again. When you add in the fact that he can stretch the floor with efficiently, he’s an even more attractive prospect. There was just a fearlessness and grit factor to Posey that I really enjoyed seeing, and it was a clear difference-maker in East’s victory. He should be a really good late pickup.

2020 6’4” F Wy’Kise Allen (South Granville)- 26 points, 5 made 3’s vs. Granville Central in the Northern Carolina Conference Championship (Didn’t take full stats for this game)
I didn’t see a better shooting forward than Allen in the month of February. In their matchup with Granville Central, he was connecting on jumpers out of the gate and kept producing as the Vikings blew out Central for a conference championship. Allen is effective from many areas on the floor; his ability to step out beyond the 3-point line is impressive, but he will also knock down mid-range looks. There isn’t any hesitation on the catch from Allen and he has a confident release. Allen isn’t the tallest forward you’ll find, but he has a big, wide body and understands how to use it. He gets his body in between guys, carves out space, times rebounds wells, and has solid leaping ability. Allen hit 5 3’s in the game but I liked how he didn’t fall in love with it once he saw a few drop. With his skill and a good motor to match, there’s no reason he won’t a solid college landing spot.

2020 6’2″ G Zane Nelson (Oak Mountain)- 24 PPG, 7 RPG, 2.5 APG, 1.5 SPG, 7 total made 3’s in the 7A AHSAA Elite 8 & Final 4
Oak Mountain ended up falling to Lee in the 7A AHSAA Final 4, but Nelson has nothing to be ashamed of given his efforts in his final 2 high school games. After a 23-point outing against Sparkman to advance to the Final 4, Nelson went for 25 points in his final high school game against Lee. Nelson is a really good overall scorer who can creates space well and can get it done from all levels. He shoots well on the move, has a good in-between game, and has a variety of finishes inside. Against Lee, he took control for Oak Mountain and helped them make things close in the 4th quarter with multiple important jumpers down the stretch. Nelson elevates well on his shot and looks comfortable shooting from college range and beyond. He wants to be involved in big moments and comes through when his team needs him. Nelson also provided Oak Mountain with a nice rebounding boost due to his respectable athleticism and active pursuit of the ball. You won’t see many plays where Nelson doesn’t insert himself into the action, and a productive play is usually the result. His recruitment has started to pick up significantly as of late.

2022 6’1″ G Tyrese Elliott (Sparkman)- 25 points, 3 rebounds, 2 assists, 4 made 3’s against Oak Mountain in the 7A AHSAA Elite 8
Elliott is a Top 5 prospect in Alabama’s 2022 class and has an advanced scoring package for a player of his age. I first saw him at the NCAA Academy last July, where he was very impressive as one of the youngest prospects in attendance. Scoring right around half of his team’s points against Oak Mountain, Elliott searched for his outside shot early in the game, and then made things happen off the bounce in the 2nd half. You could tell the defense was focused on him, but he still took what was there for the most part and made good decisions. Elliott changes speeds well and once he gets a step on you, he’s usually going to get what he wants. He is adept at drawing fouls and has a thick body that allows him to finish after initial contact. When he gets going from deep early on like he did in this particular game, it is really hard to stop him from manufacturing points. He plays with a unique blend of craftiness, confidence, and aggression that results in big scoring numbers on a frequent basis. 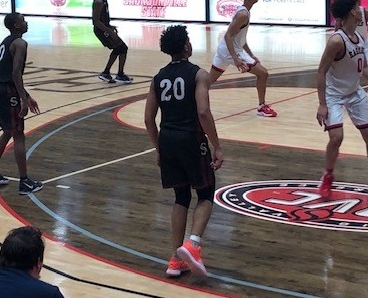 2022 6’2″ G Wilder Evers (Oak Mountain)- 10 PPG, 4.5 RPG, 4 total made 3’s in the 7A AHSAA Elite 8 & Final 4
It’s rare that you find a young player who commits to contributing in other areas before searching for offense, but Evers has already done that. Although he averaged 10 PPG in the Elite 8 and Final 4 of the 7A AHSAA Playoffs, I was most impressed with his defensive efforts and overall hustle. Evers moves his feet well, has good length, and has a solid body that is already starting to fill out. The combination of these factors allows him to do a good job on capable perimeter opponents, at both the PG and SG positions. Evers will get on the floor and does not mind fighting among bodies for loose balls and rebounds. Offensively, he is very calm and never seems to panic. He usually stays within himself off the dribble and makes athletic plays at the basket to go along with an effective 3-point shot. Division 1 programs are already taking notice of his abilities and if he continues to enhance each of the different pieces to his game, he could very well leave the summer with a few offers.