To go along with all of the region tournament and state playoff action in Georgia this month, I also made a few different trips to bordering states to see some of their talent. These trips gave me the opportunity to see some really good prospects in what were big games for their teams. Considering all of the games & players that I saw outside of Georgia this month, these were the Top 5 showings that I watched from prospects in the Class of 2021.

6’4″ PG Carter Whitt (Leesville Road)- 34 points, 7 rebounds, 5 assists, 4 steals, 4 made 3’s vs. Millbrook (65-60 win in the Cap-7 Conference Championship)
Whitt is a player who I have followed for a few years and I have always been fond of his game, but his conference championship performance against Millbrook was a unique one and it was clearly the best scoring display that I have seen from him. Whitt’s reputation comes as one of the top distributors in all of 2021, but with playoff seeding on the line, he took it upon himself to ensure that the Pride got the points they needed. He scored in just about any way you could think of with deep pull-up 3’s, soft floaters, and difficult finishes in traffic. Whitt put up 34 of Leesville’s 65 points while going 4-8 from beyond the arc and had all 11 of their points in the 4th quarter. He still found others at the right times, rebounded well, and seems to be embracing contact better. He has taken official visits recently to Nebraska, Indiana, & Virginia Tech, and one with Ohio State is in the works. Whitt has the option of reclassing up to 2020, but he also seems encouraged by the possibility of facing other top PG’s in 2021 and climbing back up the national rankings this summer. Given the lack of depth nationally at his position, the right mindset and a strong travel season from Whitt could result in a rise and Top 40 consideration. 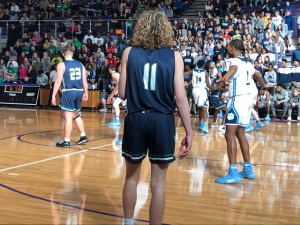 6’1″ PG Bobby Pettiford (South Granville)- 28 points, 8 rebounds, 10 assists, 2 steals, 2 made 3’s vs. Granville Central (100-74 win in the Northern Carolina Conference Championship)
I had only seen Pettiford once prior to my viewing of him last week, so I was really looking forward to watching him against Granville Central and he did not disappoint. Their matchup with GC last Saturday was for the Northern Carolina Conference Championship and Pettiford came through with triple-double like numbers. Central started in a zone and Pettiford showed a calm, mature game in operating gaps and getting his teammates involved. He tallied 7 assists in the 1st half alone to go along with an efficient 12 points. Pettiford has a strong body and powerful legs that allow him to lock down defensively, create often on offense, and absorb contact when finishing. Many guys who have the ball a lot and possess those qualities will play 100 MPH and be a bit wild, but he is patient and under control as his team’s lead guard. Pettiford is difficult to stop from getting downhill and is a sound decision-maker when choosing whether to score or facilitate after penetrating the defense. Given his physical qualities and the versatile game that he showed in this matchup, I was a bit surprised at the lack of offers for Pettiford before an ACC offer from Virginia Tech came in yesterday. That offer should help push the needle towards the heavier regional recruitment that he deserves.

6’9″ F Kuluel Mading (Burlington School)- 16 points, 10 rebounds, 8 blocks vs. Greenfield School (90-82 win in the NCISAA 1A Final 4)
When I watched Mading at the John Wall Invitational, he had a solid showing against Heritage that left me wanting to see more. I caught Burlington’s NCISAA Final 4 game against Greenfield and he came up big with a near block triple-double. Mading sets the tone defensively with his length and activity as a rim protector. He is a fluid runner and quick leaper who can alter and send away shots that you wouldn’t expect him to. The motor that he showed last Friday was exceptional; Mading hustled hard and didn’t give up on plays, stayed involved in the action on both ends, and provided Burlington with a positive vocal presence. He isn’t a back to the basket big right now who you will feed down low, but Mading is a reliable drop-off target who shows some touch and gets above the rim easily for dunks. He has to get significantly stronger before he can make an impact in college, but the traits Mading currently has are attractive and he should have a lot of suitors this spring.

6’0″ PG Dominiq Penn (Hamilton Heights)- 15 points, 6 rebounds, 4 assists, 3 steals, 3 made 3’s vs. McCallie School (67-52 win at the Dr. Pepper Classic)
Penn’s game may not include a ton of flash & excitement, but he is well-rounded and gives Hamilton Heights steady guard production. Penn can really shoot it from the outside and is also a smart, unselfish passer as the Hawks’ primary ball-handler. In both full games I’ve watched of him this year, he has been effective hitting jumpers from a variety of spots while also keeping his talented team happy. Although he isn’t overly athletic vertically, Penn is quick and utilizes deceptions and hesitations to get past initial defenders. He has good touch on floaters and does not shy away from contact in the paint. Penn’s quickness is evident on the defensive side as well; he moves his feet, contains penetration, and has a solid body that helps him on that end. Cal-State Fullerton is the only offer that has come in for him this winter but given what he’s done on a top team in the country, more should be on the way.

I had not seen Leonard in a live game before his team’s Final 4 matchup with Mountain Brook, but all of the positive comments from others had me excited to check him out. He made a strong first impression, showing different pieces to his offensive game while also playing with energy and physicality. Leonard is a good football player too and it’s easy to see when you first look at him. He has a muscular build and plays through contact very well. At 6’4″, Leonard has a height advantage over many high schools guards and also possesses solid athleticism. He used these qualities to attack the basket, rebound, and convert among bodies down low. Leonard is capable of putting the ball on the deck to create, but usually keeps things simple and stays within himself as a ball-handler. He has a clean shot that comes off his hand softly and seems to be very consistent as well. Defensively, Leonard moves well enough to keep ball-handlers in front and is strong & athletic enough to defend bigger guys inside. It’s no wonder that he already has a host of MM programs on him and seems to be gaining traction steadily. Leonard is a guy who I will have to get another viewing of early on this spring.