Region tournaments wrapped up earlier this week on Monday and the 1st round of the GHSA Playoffs begin this weekend. I was able to catch a lot of exciting region tournament battles and numerous guys rose to the occasion and helped their teams. Here are 7 under the radar seniors who came through and produced in these important contests.

*Our individual showcase for 2020 prospects, the Senior Showdown, will be held next month on March 22nd. Players like the ones talked about below will be participating. Spots are filling up and college coaches are marking the date on their calendars. You can find more info at this link:

I understand that schools are always skeptical and hesitant when it comes to smaller guards, but if the production is there against legitimate competition, it shouldn’t matter. Augustave has done that all year and it culminated with a Region Championship win for Buford over Cedar Shoals last week, led by 24 points from him. Each game I watch him, Augustave brings a competitive fire that sets the tone for the rest of his team. His speed and craftiness with the ball allow him to get to his left hand and get to the basket consistently, but he’s also a really good outside shooter. He’ll take what each game allows for offensively and has a knack for drawing fouls and converting on difficult layups. Augustave creates turnovers frequently on defense and is pretty savvy on that side of the ball. He has adapted and progressed as being a primary ball-handler and should continue to improve there. 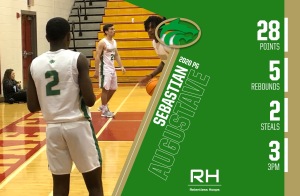 The older Bell brother at Chapel Hill, Mike is a nice player as well. He played with strength and toughness throughout their matchup with Sandy Creek Saturday. Bell attacks the basket physically and gives the Panthers a good rebounder from the guard spot. Although Bell’s shot might look a lot different than others, he has hit 44 3’s on the year at a 38% clip, making 2 in the Sandy Creek game. As Sandy Creek gained momentum and tried to pull away on Saturday, Bell came through multiple times with productive plays. Scrappy hustle plays, an important defensive stop, or a contact finish, he did it. His contributions in addition to the other Chapel Hill weapons should result in a deep playoff run in AAAA.

Jefferson had a lot of seniors that produced at a good rate in the Region 8-AAA Championship, but I loved how Parker impacted the game in a ton of different ways. He has legitimate guard skills at 6’3-4” and just get things done. He’s effective as ball-handler and facilitator because of his ability to shield defenders and see over smaller guys, to go along with decent speed. His size advantage over other guards is evident when he scores also; Parker finishes well and uses his body well in the paint. Defensively, his hustle is always on display. He constantly looks for steal opportunities, goes for loose balls, and takes charges. Parker also rebounds at a good rate and will do so in traffic. His game is a little unorthodox and he’ll need to improve as a shooter, but Parker does a lot of things that impact winning.

James might not be a well-known prospect, but he has quietly put together a solid senior season for McDonough and is starting to generate some talk among college coaches as well. He is a good shooter with a high release and he elevates well on his jumper. James is confident and capable both on catch-and-shoot opportunities and off the dribble. His arms are long and he uses them to their full advantage. James gets his hands in passing lanes for steals and deflections, blocks shots, and extends for rebounds. Add in respectable athleticism and you have a pretty versatile SG. He has just started to tap into his potential and it may take him longer than others in college, but I think he’ll help a program at the next level.

With a rowdy, supportive fan base on Monday night, Brown led the Franklin County charge in their exciting matchup with Jefferson. Like the aforementioned Augustave, Brown lacks size but has been a key player for Franklin County since early in his high school career. He is quick and has a nice set of moves with the ball in his hands, which resulted in Jefferson having lots of trouble keeping him in front during their matchup. Brown didn’t settle for many jumpers and continued to go inside once he started to have success doing so. He’s a pretty creative finisher and is able to hang and adjust once in the air. With good overall athletic ability and offensive skill, Brown should do well in college with spacing and other weapons around him. I think he has nice defensive potential also as he adds weight.

Brown continues to show flashes of things that make me feel like he’ll blossom after a few years in college. His 17 points against Chattahoochee came in a variety of ways, scoring both on the perimeter and at the basket. He started the game with 2 soft 3’s in the 1st quarter that came from the left corner and were all net. As the game progressed, shots weren’t falling for him so he ran the floor and cut off the ball to show his ability above the rim. Brown is a fluid runner who is light on his feet and has solid leaping ability. His touch inside is good just like with his outside shot and as he adds strength it will allow him to get better positioning on the block and rebound more consistently.

I’m not sure how often he does this, but Bell’s shooting against Hart County was the X-Factor in Monroe Area securing the 3 seed out of Region 8-AAA. With Derrick Brown battling foul trouble, they needed another offensive option outside of Kendric Lyles, and he more than filled that hole. As soon as he entered the game in the 1st half, Bell was dialed in and connecting on bombs from beyond the arc. He did not slow down as the game progressed, missing very few shots and coming through whenever an important make was needed. This team could surprise some people if he puts together another game like his 25 points and 7 3’s on Monday. 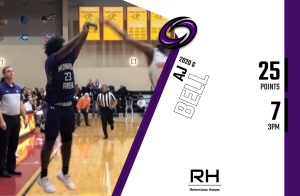