6’3” W Steven Lyles (Johns Creek)
With opposing teams starting to focus on senior PG Jordan Johnson, Lyles has picked up his production in the Gladiator backcourt as of late. His body and athleticism are huge assets and allow him to produce in the paint often even after taking multiple hits. Lyles is really fast in the open court and is determined when he is on his way to the basket. He gets off the floor with ease and has pretty good body control as well. Although he is definitely best attacking the rim, he has shown the ability to knock down open shots and his form makes me believe that he’ll continue to get better in this area. Lyles also plays hard and commits to making an impact on defense; his aforementioned physical traits result in him being a competent defender both on and off the ball. He is starting to come into his own and should carry some momentum into the travel season. 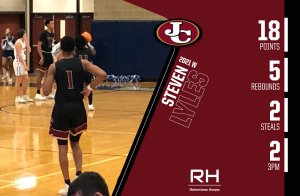 6’2” SG Ian Davis (Discovery)
Davis has benefited greatly from an increased role this year and seems to gain confidence in each game that I see him. In previous years, Davis served primarily as a shooter for his high school and travel teams, but now he has developed into a nice all-around player and is constantly improving. The shooting is still there to go along with enhanced athletic ability and playmaking ability. The thing that stood out the most from Davis in Discovery’s game against Duluth was how active he was. On both sides of the ball, he was rarely seen standing stationary. His movement without the ball on offense resulted in numerous offensive rebounds and easy baskets inside, as well as steals defensively after playing passing lanes. Davis is also more comfortable as a ball-handler & facilitator, and is making a point to show his improved leaping ability in transition. I think he is going to have a good spring.

6’5” W Travis Harper (St. Anne-Pacelli)
St. Anne-Pacelli came up to Metro Atlanta this past Saturday to take on 7A Campbell and you could tell that Harper was out to prove himself. Harper hunted his shot from the jump, getting himself going with soft mid-range shots that smaller defenders could not contest too well. He also possesses the length and athleticism to finish inside; Harper drove baseline quickly a few different times and extended over defenders in traffic to convert. In the 2nd half of the game, Campbell keyed in on him more, but he still managed to find some holes in the defense and sunk some shots beyond the arc that were important. All of his different qualities point to long-term promise. If Harper shows that he can score like this in an efficient manner during the travel season, his recruitment will take off. 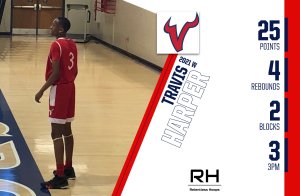 6’4” PG JoJo Peterson (Mount Pisgah)
One of the fastest rising prospects in the state, Peterson has been outstanding for Mount Pisgah in 2019-20 and put forth another solid showing against St. Francis last Saturday. He has proven that he can effectively man the PG spot and poses a tough cover because of his size and speed at the position. Peterson balances scoring and distributing very well and I think that has been a huge piece in Mount Pisgah solidifying themselves as a top team in A-Private. Honestly, he may be a little too unselfish at times. Peterson can get to the basket almost whenever he wants and is making consistent strides with his outside shot, which was evident again in Saturday’s game. Peterson and fellow junior Chase Tucker (who will be included in the January Sharpshooters article) combined for 30 points against St. Francis, proving to be a nice 1-2 bunch in the Pisgah backcourt. Elon remains as his lone offer currently, but a ton of schools are tracking him and his offer list is sure to grow soon.

6’5” W Jaylen Jackson (Douglas County)
Similar to Peterson, Jackson is another guy whose recruitment is due for a bump, and given the way he played on MLK Day, it could happen very soon. He is known for his aggression and high-flying abilities, but against McDonough, Jackson showed a much-improved perimeter shot. He connected on 3 3’s in a short period of time in the 2nd quarter & sunk 4 total in the period, including 2 that were from college range. He kept looking for opportunities in the 2nd half and hit some more jumpers from a variety of spots. Throughout the course of the game, Jackson also showed progression when on the move with the ball in transition. Adding the shooting component consistently will serve as a big boost for him as a prospect considering that he already has exceptional athletic ability and a good motor.

6’5” SF Haden Newport (Murray County)
Newport isn’t a guy who is well-known up in Northwest Georgia, but he has already surpassed 1,000 points as a junior. I watched his Murray County group take on Lakeview Fort Oglethorpe last week, a game in which he contributed 22 points and 10 rebounds. Newport is a unique tweener who can play inside or out and scores in a variety of ways. Against LFO, he was really good working the high-post for turnaround jumpers. He has good touch on his shot, gets some elevation, and can step out for 3’s as well. He’s not a true perimeter player, but he will handle in transition after getting rebounds and can put the ball on the floor from the wing. Although he lacks strength, Newport is a pretty good leaper and uses it on the boards and to alter shots. He was active the entire game and it resulted in good production. 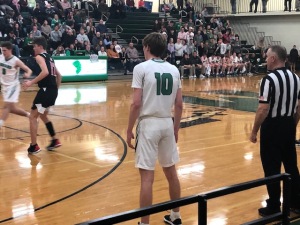