Last night I caught a Region 2-AAAAAAA matchup between two talented teams in Wheeler and Pebblebrook. The game wasn’t as high-scoring as one may have expected, but after a feeling out process early on, both teams looked to pick up the pace. Wheeler led by 11 at halftime, and although Pebblebrook made up some ground in the 3rd quarter, the Wildcats responded well in the 4th to defend their home court and get a 66-53 victory. Some had off games and others rose to the occasion; here are 4 upperclassmen who I thought had good nights.

2020 W Prince Davies (Wheeler)- 17 points, 3 rebounds (3 made 3’s)
One of the few unsigned seniors in the game, Davies stepped up and led the Wildcats in scoring in their win last night. The most impressive part of Davies’ showing was the efficiency at which it was done. He didn’t need the ball much and used hardly any dribbles to get his points, taking what was there each time and waiting for open opportunities. Davies has made nice strides with his jumper, which he has a high release and soft touch on. His 3 -point shooting was a big help against Pebblebrook’s zone, along with his activity and efforts to find creases in the defense within the paint. Davies has the length to finish after running the floor and uses it in passing lanes on defense as well. His low-maintenance game and solid progressions should result in college looks.

2021 SG Max Harris (Wheeler)- 15 points, 2 assists, 2 steals
Harris’ outing last night gave evidence of recent improvement, and the fact that it was done against an extremely talented team made his performance even more encouraging. He has a calm, relaxed game, and doesn’t seem to ever change his demeanor. Harris was patient against Pebblebrook’s defense made good decisions with the ball, and was particularly good at shielding the ball with his body and then extending to finish at the basket, even while taking contact. Similar to Davies, Harris isn’t a guy who will dominate the ball, but instead understands how to find his points in other ways. His offensive game is pretty well-rounded and he positions himself well off the ball. Although he isn’t overly vocal or demonstrative, Harris seems to have picked up his defensive efforts and has good instincts on that side of the ball. 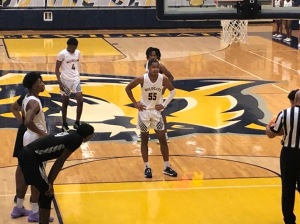 2021 F Ja’Heim Hudson (Wheeler)- 4 points, 9 rebounds, 3 assists, 4 blocks
When you can have a significant impact on the game without scoring many points, that is a positive sign for a prospect’s future, and that’s exactly what Hudson did last night. With the zone that Pebblebrook employed for a good chunk of the game, his offensive touches were limited, but that did not impact his effort. Hudson stayed active and was effective as a rebounder and rim-protector throughout the game, even with a lot of bodies flying around inside. He looks improved athletically and really moved his feet well when defending on the perimeter a few times. Hudson has good feel, passes well, and doesn’t force things. He had a huge dunk late in the game that clearly energized the Wheeler team and helped them to keep their lead.

2021 PG Danny Stubbs (Pebblebrook)- 16 points, 3 rebounds, 2 assists
With Blake Hadley injured and Pebblebrook’s other juniors struggling to find offensive consistency, the Falcons desperately needed offense in the 2nd half after scoring 21 points in the 1st half. Stubbs took it upon himself to make things happen and manufacture points for the team after halftime. Almost every time down the court, Stubbs looked to get downhill and used his speed, determination, and craftiness to touch the paint. Once there, he displayed a variety of finishes with either hand and got to the free throw line multiple times. Stubbs has a smooth, laid-back game but lots of skill and you can tell he is confident in himself. In a game where his team was settling for jumpers, he made a point to attack the lane. His effort in this one was similar to how he played against Therrell, in which he also really turned it on in the 2nd half. If he can set the tone and stay aggressive like that all game, every game, it will help Pebblebrook greatly the rest of region play. 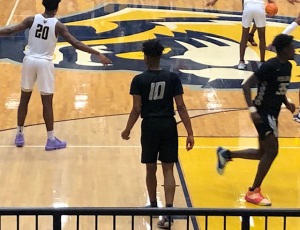